The nonlinear dynamics of fluid flow is key to phenomena in fields as diverse as astrophysics, biology, engineering, physics and the geosciences. Research at the IAM focuses on practical fluids problems in many of these applications, but also explores fundamental theory of fluid mechanics itself. Specific directions of research include the instabilities encountered in shear flows and vortices, the dynamics of complex fluids, flow problems in industrial processes and the environment, and glacier mechanics. We are always interested to hear from potential graduate students and postdoctoral fellows. We recruit from many different backgrounds, including mathematics, physics, engineering and the geosciences. We often supervise undergraduate thesis projects and take on summer research undergraduate students. 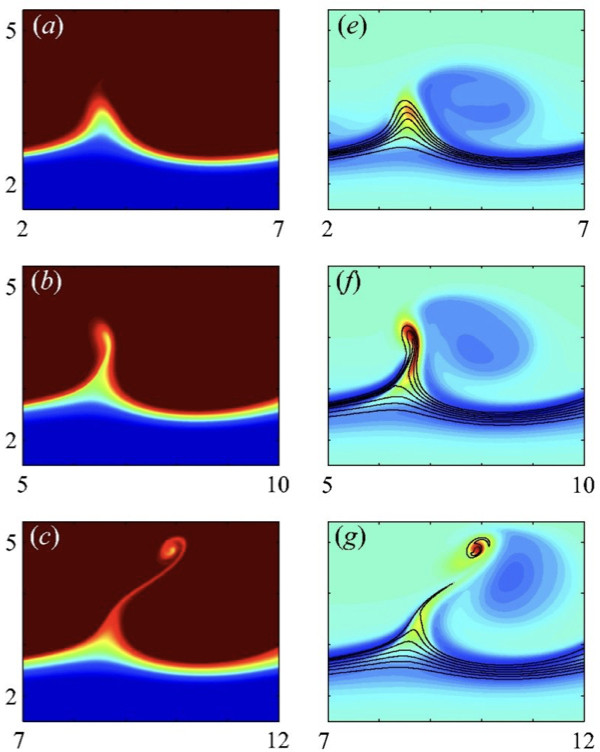 Research facilities of the IAM Fluid Mechanics Group include the Laboratory for Complex and Non-Newtonian Fluid Flow (Fluids Lab), which is operated by the IAM faculty in the Mathematics Department. The Lab contains space, tools and equipment for experiments, including several rheometers and other equipment for studying fundamental fluid properties. Recent experiments include skipping and sloshing (the dynamics of skimming stones and reservoirs with movable dams), as well as the pinch-off of pendant drops and liquid bridges of complex fluids.

Complex fluids have microscopic structure that influences the macroscopic flow behaviour. For example, suspended polymers can unravel and intertwine as fluid flows, endowing the material with an effective elasticity; such viscoelastic fluids climb rods rotating in them and extend into strong, fine filaments. Other fluids have networks of interacting particles that build a microstructure capable of holding the fluid up against gravity and other stress; such viscoplastic fluids include mud, hair gel and tomato ketchup.

The Fluid Mechanics Group is composed of several core IAM faculty who are actively involved in the IAM activities and supervise IAM students or postdoctoral fellows. Prospective students interested in research in Fluids Mechanics in the IAM are encouraged to contact one or more of the coe faculty as potential supervisors and let them know of their interests. The Group’s research areas incude complex fluids, atmospheric and ocean dynamics, geophysics, and engineering fluids.

Research in fluid mechanics prompted the development of many classical and modern techniques of Applied Mathematics. Matched asymptotic expansions and spectral methods for partial differential equations were both developed with fluid problems in mind, and the theory of solitons and the inverse scattering transform has its roots in the study of water waves. The broad implications for researchers in fluids are that a solid grounding in the tools of applied mathematics are highly recommended, if not essential.